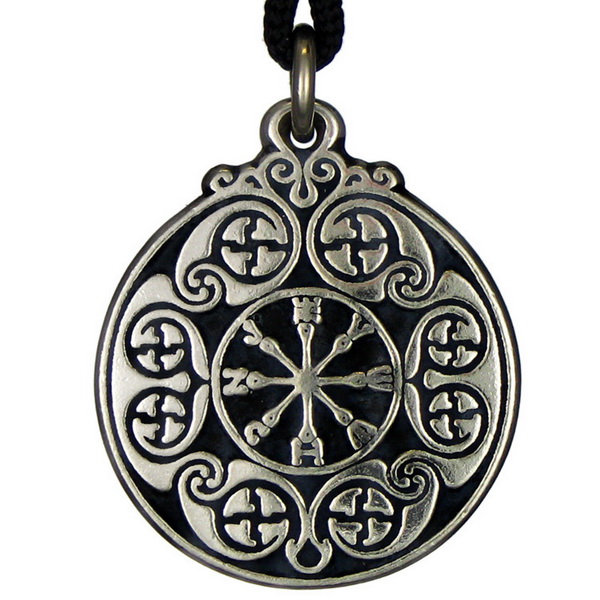 The "Luaithrindi" a pattern providing Protection, and the three armed "Triadic" Spirals,
as well as
eight Magical "Ciphers of the Angels,"
all interlocked in one original designto create a powerful Shield of Protection.

The eight "Luathrindi" patterns around the outside of this amulet are
believed to hold the Magical power of Confusion over an enemy's mind;
creating the opportunity to either Attack or Defend.

Luaithrindi translates as: the center of the circle where Heaven and Earth meet.
This glyph's power is evident from its placement upon numerous Warrior's helmets,
shields, and swords found by archeologists all over the World.

Starting at any "Luathrindi" symbol, one can follow a symbolic Labyrinth
- a maze where Infinite Life Paths are presented to us.
Following the labyrinth you will find four Triple Spirals representing the "Weavers of Divine Fate"
-theThree Goddesses: Clotho, [the Spinner], Lachesis [drawer of lots], and
Atropos [the inevitable] who weave the thread of each person's Destiny.

It is believed each person is a center point of light and that their radiating
Light interacts with the light of those of others around to complete a
"woven web" of interconnected life force within your community. This notion
that human fate was spun around a person at birth by divine Spinners was
popular in Greek mythology, poetry, and literature.

In the circle at the center of the design are the "Seals of the
Seraphim," (The first of the nine orders of Angels in medieval angelology.)
These "Angelic" symbols provide Magical Angelic Protection as well as help
enhance Spiritual Growth. It is told that these Angelic seals were revealed
to King Solomon as an avenue of guidance in his Magical Kabala. When these
symbols are used, the Seraph (a Celestial Being having three pairs of wings)
who is associated with the particular symbol is bound by their Seal to help
the individual in need.

The symbols are from an ancient Magical script
called "Writing of the Angels" and translate as:
"The Severe Justice of Almighty God, God of Victory, will Protect (the wearer.")